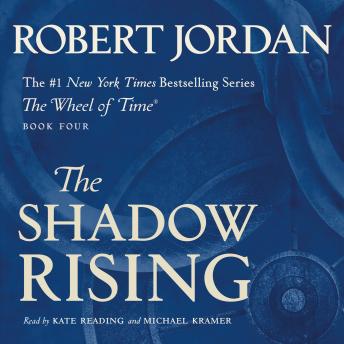 The Shadow Rising: Book Four of 'The Wheel of Time'

In The Shadow Rising, the fourth novel in Robert Jordan’s #1 New York Times bestselling epic fantasy series, The Wheel of Time®, Rand al’Thor now wields the sword Callandor. He is both the Champion of Light and the Dragon Reborn. Now, he seeks answers to another prophecy that lies with the warrior people known as the Aiel to put him on the path of learning how to wield the One Power.

Accompanied by Moiraine Damodred, Rand arrives at the Aiel Waste and is granted permission by the Wise Ones to enter the sacred city of Rhuidean. After passing through a doorframe ter'angreal, Moiraine gains foresight while the Aiel await Rand's return, either with both arms marked by dragon symbols, validating his identity as He Who Comes With the Dawn, the Chief of Chiefs of all the Aiel—or to never emerge at all.

Since its debut in 1990, The Wheel of Time® has captivated millions of readers around the globe with its scope, originality, and compelling characters. The last six books in series were all instant #1 New York Times bestsellers, and The Eye of the World was named one of America's best-loved novels by PBS's The Great American Read.

The story continues, although this one had some major things happening, there were several points that seemed to drag on. Also, for a plot driven story, this book did not have a strong, major conflict or resolution. The characters are developing, and that is fun to experience, and the world and the history here continues to grow in intrigue. I am still enjoying the overarching story and am hopeful that the next one starts trying more things together before opening everything back up. One thing that has been bothering me is something that bothered me in Thomas Covenant, that is that the main hero is imbued with incredible power, but though he is rarely able to make good use of it, when things get to an impossibly challenging level, he dues ex machinas it all away

The Wheel of Time series is an outstanding story. Robert Jordan does a fantastic job painting the world around his cjaracters and immersing you in the story. The narrators of this audiobook, however, leave a lot to be desired. Additionally, the quality of the audiobook is very lacking with frequent skips and distortions similar to listening to a CD with several scratches.

excellent book! really gets you involved with the cultures of tear and the aiel. personally my favorite book in the whole series

the story is continues as does some major plot points. Perrin starts his journey and truly becomes one if my all time favkrite characters. absolutely love the story and book. the 3* rating comes from the skips in the audio book. There are multiple occasions where it skips like a scrstched cd

I love the story telling.

great experience. I couldn't stop listening to it.

This book was fantastic, I am so into the wheel of Time series Robert Jordan is an epic story teller that keeps on fascinating me a new

Great book! I've read Robert Jordan's wheel of time series before and now I'm listening to them while at work. It really helps to pass the time and I much prefer it to listening to music. The only issue I have is with the quality. There are several skips in places like listening to a bad cd. The narrators are not what I would want but what are you going to do? 9/10 would recommend.

Lover being able to listen to the book and the narration is so wonderful.

Great Series, I really enjoy listening to them and I can't stop listening

The best so far, and that was unbelievable before reading.

Great Book, even better series. A must read for medieval fantasy lovers.

if you have insomnia then get this book. i would give it a zero if i could.

Robert Jordan's epic series continues to capture the pure essence of fantasy and my imagination in The Shadow Rising. If you enjoy fantasy, read and listen to this series, it just doesn't get any better.

This series is forfilling and enjoyable. I'm on to book 5 of 15.

Of the four first books this is the best. So, not terrible but far from good. Don’t waste your time.

Very butiful chapter of this long and interesting saga.

A lot of interesting concepts for the world that Robert J has created. We see a lot of progression for Mat and Rand. A great listen.

A great read. An even better listen.

Love it with all my heart

What more can I say? Michael Kramers voice AND Robert Jordans work. That just makes the books even better. Fantastic series

The book was told well and love the adventure and intrigue.

Book 4 is another great listen and the series is still going strong as far as I am concerned.

It's a great story series with a great plot oh, very well written, and very entertaining. As for the narration it was really good has been for all the books previous as well.

I love this book!!! I've read most and they would keep me up for nights

With this fourth book, I am finally starting to get used to Robert Jordon's style. This book, like the rest I've read, starts slow as Jordon builds the story. However, once the action gets going - it's very exciting. As the characters are maturing, so is the story. With lots of twists and surprises, this has been my favorite Wheel of Time book so far.

Robert Jordan's series is fascinating. This is a worthwhile tale to listen to, and the split-journeys of the main characters adds to the flavor of the times and trials of the whole world, rather than detracting from the story as a whole as some "over populated" stories can become. You'll like it -- I certainly did. T. V. Vessels, Jr. - author.

This is a great series! Make sure you read them in order or you'll be totally lost.

I very much enjoyed this installment. Excellent character development. I have listened to 8 in this series so far and have loved every one of them.

The Wheel of Time series is outstanding on audiobook. Highly recommend listening to all from start to finish.

The story continues to develop, as do the characters. The main characters begin to split up in this book, to take on threads of the story for their own. Similar to the LOTR after the fellowship breaks up. Jordan has also created a wide range of activities, so the characters are not doing the same thing in different places, again, similar to the LOTR. A continued must read of the series, much more is revealed, but then more questions arise.

This title is due for release on November 3, 2004
We'll send you an email as soon as it is available!