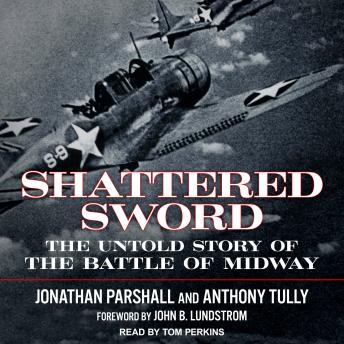 Shattered Sword: The Untold Story of the Battle of Midway

Many consider the Battle of Midway to have turned the tide of the Pacific War. It is without question one of the most famous battles in history. Now, for the first time since Gordon W. Prange's bestselling Miracle at Midway, Jonathan Parshall and Anthony Tully offer a new interpretation of this great naval engagement. Unlike previous accounts, Shattered Sword makes extensive use of Japanese primary sources. It also corrects the many errors of Mitsuo Fuchida's Midway: The Battle That Doomed Japan, an uncritical reliance upon which has tainted every previous Western account. It thus forces a major, potentially controversial reevaluation of the great battle.

Parshall and Tully examine the battle in detail and effortlessly place it within the context of the Imperial Navy's doctrine and technology. With a foreword by leading World War II naval historian John Lundstrom, Shattered Sword is an indispensable part of any military buff's library.

Shattered Sword is the winner of the 2005 John Lyman Book Award for the 'best book in US naval history' and was cited by Proceedings as one of its 'notable naval books' for 2005.

very in depth view from the Japanese perspective

Fascinating look at one of the most important battles of WW2. Brought many of the Admirals in the Japanese fleet into focus. I always thought based on Prague's analysis that Yamamoto was an "honorable" leader who was fighting a war forced on him. Not true.

I thought it was very good. A lot of detailed information from the Japanese point of view. If you like technical breakdowns of battles you will like this.

It is very detailed and technical. I loved it but a person who does not want such minute detail or is not totally fascinated about naval and air strategy they will not finish it.

Accurately researched presentation on how Japan viewed and experienced the battle. A look beyond the Hollywood and victors recall of events

It’s a afternoon movie at school.

Enjoyed the book. a lot of detailed information, sometimes too in depth. There were some facts and names that were just too many and confusing. Unless you have an extraordinary memory, most of this will be immediately forgotten. His observations comparing his views with those of other authors was insightful. Overall a good and scholarly treatise on a major battle of World War II.

Boring,could have been half as long to get to the gist of the story.

Great narration. Clear and immersive. Only downside is no supporting visual aids. I recommend YouTube “Montemayor” battle of midway videos to supplement and have some visuals.

Excellent book could not stop listening

A unique perspective to those familiar with only the American perspective. I would not consider this to be the definitive Midway account, but it does bring to light things that need to be considered.