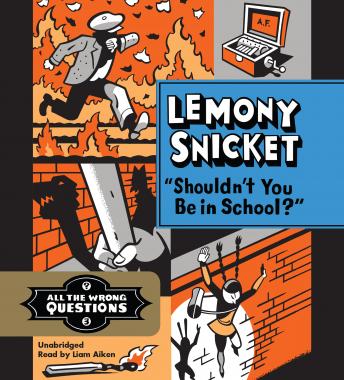 'Shouldn't You Be in School?'

Is Lemony Snicket a detective or a smoke detector?
Do you smell smoke? Young apprentice Lemony Snicket is investigating a case of arson but soon finds himself enveloped in the ever-increasing mystery that haunts the town of Stain'd-by-the-Sea. Who is setting the fires? What secrets are hidden in the Department of Education? Why are so many schoolchildren in danger? Is it all the work of the notorious villain Hangfire? How could you even ask that? What kind of education have you had?
Maybe you should be in school?

'Shouldn't You Be in School?'