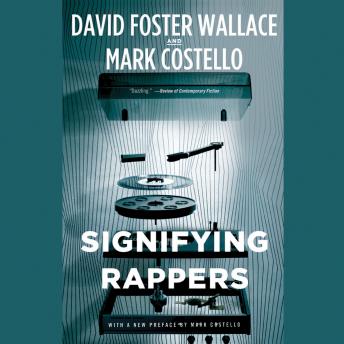 Living together in Cambridge in 1989, David Foster Wallace and longtime friend Mark Costello discovered that they shared 'an uncomfortable, somewhat furtive, and distinctively white enthusiasm for a certain music called rap/hip-hop.'

The book they wrote together, set against the legendary Boston music scene, mapped the bipolarities of rap and pop, rebellion and acceptance, glitz and gangsterdom. Signifying Rappers issued a fan's challenge to the giants of rock writing, Greil Marcus, Robert Palmer, and Lester Bangs: Could the new street beats of 1989 set us free, as rock had always promised?

Back in print at last, Signifying Rappers is a rare record of a city and a summer by two great thinkers, writers, and friends. With a new foreword by Mark Costello on his experience writing with David Foster Wallace, this rerelease cannot be missed.

This title is due for release on July 23, 2013
We'll send you an email as soon as it is available!