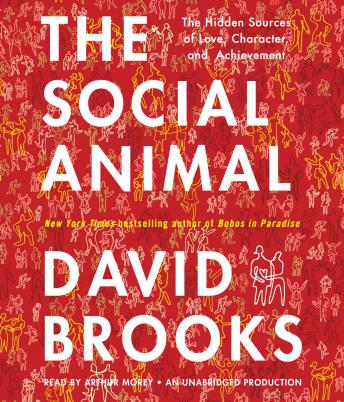 The Social Animal: The Hidden Sources of Love, Character, and Achievement

With unequaled insight and brio, David Brooks, the New York Times columnist and bestselling author of Bobos in Paradise, has long explored and explained the way we live. Now, with the intellectual curiosity and emotional wisdom that make his columns among the most read in the nation, Brooks turns to the building blocks of human flourishing in a multilayered, profoundly illuminating work grounded in everyday life.

This is the story of how success happens. It is told through the lives of one composite American couple, Harold and Erica—how they grow, push forward, are pulled back, fail, and succeed. Distilling a vast array of information into these two vividly realized characters, Brooks illustrates a fundamental new understanding of human nature. A scientific revolution has occurred—we have learned more about the human brain in the last thirty years than we had in the previous three thousand. The unconscious mind, it turns out, is most of the mind—not a dark, vestigial place but a creative and enchanted one, where most of the brain’s work gets done. This is the realm of emotions, intuitions, biases, longings, genetic predispositions, personality traits, and social norms: the realm where character is formed and where our most important life decisions are made. The natural habitat of The Social Animal.

Drawing on a wealth of current research from numerous disciplines, Brooks takes Harold and Erica from infancy to school; from the “odyssey years” that have come to define young adulthood to the high walls of poverty; from the nature of attachment, love, and commitment, to the nature of effective leadership. He reveals the deeply social aspect of our very minds and exposes the bias in modern culture that overemphasizes rationalism, individualism, and IQ. Along the way, he demolishes conventional definitions of success while looking toward a culture based on trust and humility.

The Social Animal is a moving and nuanced intellectual adventure, a story of achievement and a defense of progress. Impossible to put down, it is an essential book for our time, one that will have broad social impact and will change the way we see ourselves and the world.

One of the most insightful dissemination’s about the things that makes us human. Incredible well researched. One of my favorite books ever.

love the writer's vocabulary, especially the way he makes science and prose interact

Very interesting insights as to how our minds work and grow. I enjoyed the fact that there are characters that you "grow with" which helps explain the sometimes difficult concepts. Toward the end of the book, he gets pretty deep into behavioral economics which was a tad daunting, but by the time I realized he was drifting, he comes back into character development. Very good read for those that like to learn some things.

While there was interesting information about how our brain works, I found my mind drifting away and had difficulty staying focused on this book. Maybe if I would have stuck it out, I would have enjoyed it. After two cd's, I returned it.

While there was interesting information about how our brain works, I found my mind drifting away and had difficulty staying focused on this book. Maybe if I would have stuck it out, I would have enjoyed it. After two cd's, I returned it.

This offered very interesting insight into our society and individual behaviors. The information cited studies as part of the story of a couple from each infancy to death recounting the human experience with insights and information beyond the common psycho-babble so much around us.

This title is due for release on March 8, 2011
We'll send you an email as soon as it is available!