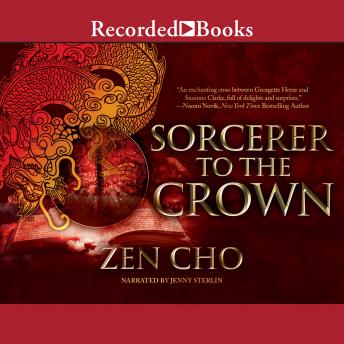 Sorcerer to the Crown

STORY The Royal Society of Unnatural Philosophers, one of the most respected organizations throughout all of England, has long been tasked with maintaining magic within His Majesty's lands. But lately, the once proper institute has fallen into disgrace, naming an altogether unsuitable gentleman-a freed slave who doesn't even have a familiar-as their Sorcerer Royal, and allowing England's once profuse stores of magic to slowly bleed dry. At least they haven't stooped so low as to allow women to practice what is obviously a man's profession. At his wit's end, Zacharias Wythe, Sorcerer Royal of the Unnatural Philosophers and eminently proficient magician, ventures to the border of Fairyland to discover why England's magical stocks are drying up. But when his adventure brings him in contact with a most unusual comrade, a woman with immense power and an unfathomable gift, he sets on a path which will alter the nature of sorcery in all of Britain-and the world at large. The first in a trilogy, SORCEROR TO THE CROWN will appeal to fans of THE NIGHT CIRCUS and JONATHAN STRANGE & MR NORRELL. QUOTES 'An enchanting cross between Georgette Heyer and Susanna Clarke, full of delights and surprises. Zen Cho unpins the edges of the canvas and throws them wide.'-Naomi Novik, New York Times bestselling author of the Temeraire novels 'A delightful and enchanting novel that uses sly wit and assured style to subvert expectations while it always, unfailingly, entertains. I loved it!' -Kate Elliott, author of the Spiritwalker series 'A deliciously true tale of politics and power in a charming, cruel world-it demands and deserves to be read again and again. Cho has humor and flair to match Pratchett and Heyer plus her own marvelous style.'-Karen Lord, author of The Best of All Possible Worlds AUTHOR Zen Cho was a 2013 finalist for the John W. Campbell Award for Best New Writer and has been nominated for the Pushcart Prize. She lives in London.

Sorcerer to the Crown