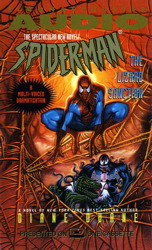 A multi-voice, fully dramatized recording -- enhanced with dazzling sound effects
Experience Spider-Man as never before!
The amazing Spider-Man launches into his most harrowing adventure as a trip to Florida turns into a deadly race to prevent disaster! The Lizard is wreaking havoc throughout the Everglades, as he seeks a cure for his dual identity as the reptilian villain and the human scientist Dr. Curt Connors -- the result of an experiment gone horribly wrong.
Spidey's attempts to halt the Lizard's rampage lead him to a web of intrigue and danger that may spell the destruction of a space shuttle launch. The action heats up as Venom, the alien symbiote who wants Spider-Man dead, arrives, targets the Lizard for death, and won't let anyone stand in his way!
Spider-Man must save the shuttle, halt the Lizard's rampage, and keep Venom from destroying the Lizard and the helpless scientist trapped inside him...before it's too late!

This title is due for release on April 1, 1996
We'll send you an email as soon as it is available!