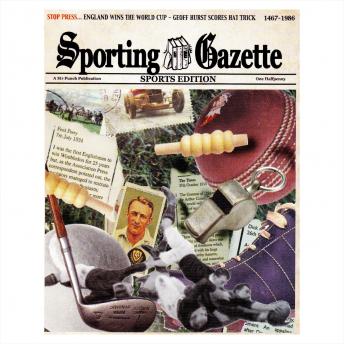 The Sporting Gazette is a rousing gallop through the British sporting calendar of the last nine hundred years in the company of chroniclers, diarists and letter-writers as we eavesdrop on some of the most memorable events in the colourful history of British sport, as performed by an outstanding cast of actors. The Sports edition journeys from sword fights to boxing and jousting to motor racing, we join such diverse characters as A. A. Milne, Dick Francis, Queen Victoria, Kenneth Wolstenholme, Tony Jacklin and Sir Arthur Conan Doyle as they share their experiences of England winning the 1996 world cup; the very first game of rugby football; Roger Bannister breaking the four-minute mile, a game of cricket on horseback in 1794 and the death of England's finest cricketer W.G. Grace. Narrated Eileen Atkins; Cheryl Campbell; Nigel Davenport; Alex Jennings; Richard Johnson; Hugh Laurie; Michael Maloney; Geoffrey Palmer; Michael Pennington; Prunella Scales; Samuel West, and John Wood.