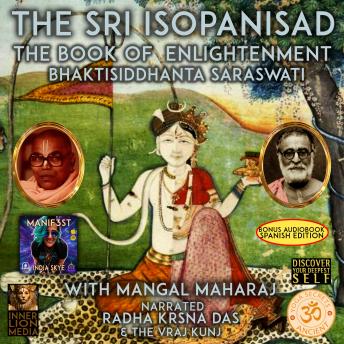 The Sri Isopanisad: The Book Of Enlightenment

This great work is a key scripture of the Vedanta sub-schools and an influential Śruti to diverse schools of Hinduism. It is also the 40th chapter of Yajurveda. The name of the text means roughly enveloped by the Lord', or 'hidden in the Lord (Self)'. The text discusses the Atman (Soul or Self) and is referenced by both Dvaita (dualism) and Advaita (non-dualism) sub-schools of Vedanta. Mahatma Gandhi thought so highly of this scripture he remarked, 'If all the Upanishads and all the other Vedas happened all of a sudden to be reduced to ashes, and if only the first verse in the Sri Isopanisad were left in the memory Varn Ashram Dharma would live forever.'


Bhaktisiddhanta Sarasvati, born Bimala Prasad Datt, was a Gaudīya Vaisnava Hindu guru, ācārya, and revivalist in early 20th century India. To his followers, he was known as Srila Prabhupāda.


Mangal Maharaj born in Anandapur West Bengal was a self-realized spiritual master in the Gaudiya Vaishnava tradition. In later years he founded an ashram in Lockport, New York.

This title is due for release on October 25, 2022
We'll send you an email as soon as it is available!