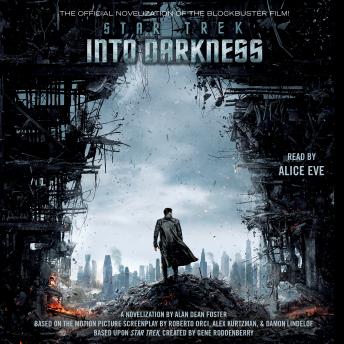 The official novelization of the blockbuster film!

Months after the dramatic events seen in the 2009 blockbuster film Star Trek, the crew of the U.S.S. Enterprise—including Cap­tain James T. Kirk, First Officer Spock, Doctor Leonard McCoy, Lieutenant Nyota Uhura, Chief Engineer Montgomery Scott, Lieu­tenant Hikaru Sulu, and Ensign Pavel Chekov—is called back home. But an unstoppable force of terror from within their own organization has declared all-out war on Starfleet and everything it stands for, leaving Earth in a state of crisis. Now with a personal score to settle as a result, Kirk must lead a covert manhunt to a war-zone world to capture a one-man weapon of mass destruc­tion. As these valiant heroes are propelled into an epic chess game of life and death, love will be challenged, friendships will be torn apart, and sacrifices must be made for the only family Captain Kirk has left: his crew.