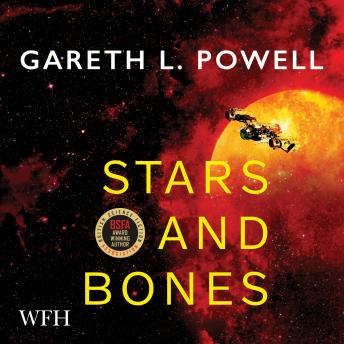 #1 of Stars and Bones

Seventy-five years from today, the human race has been cast from a dying Earth to wander the stars in a vast fleet of arks-each shaped by its inhabitants into a diverse and fascinating new environment, with its own rules and eccentricities.

When her sister disappears while responding to a mysterious alien distress call, Eryn insists on being part of the crew sent to look for her. What she discovers on Candidate-623 is both terrifying and deadly. When the threat follows her back to the fleet and people start dying, she is tasked with seeking out a legendary recluse who may just hold the key to humanity's survival.

Gareth Powell drops you into the action from the first page and then Just. Keeps. Going. This is a pro at the top of his game.
John Scalzi

A gripping, fast-paced space opera that poses the unique question: what if instead of saving humanity, aliens decided to save the Earth?
Stina Leicht, author of Persephone Station

An interstellar intelligence has a plan for Earth's future, but is humanity a part of it? Fast-paced and thoughtful, Stars and Bones leaves the reader well-fed with hearty helpings of mystery, suspense, adventure, and terror.
Marina Lostetter, author of Noumenon

Gareth Powell's Stars and Bones is shocking and beautiful--an electric, epic, and sometimes gruesome look at humanity facing its biggest challenge yet. Powell keeps the pressure on and doesn't let go. I enjoyed it immensely.
Karen Osborne, author of Architects of Memory

A vividly imagined, propulsive read. Filled with a loveable cast of characters. Powell's writing creates a rich tapestry of their voices and inner lives. I think readers will be thrilled by this story.
Temi Oh, author of Do You Dream of Terra-Two?

Big ships, big ideas and big emotions. Thrilling space opera which is epic in scope, yet always rooted at the human level, as all the best sci-fi is.
Emma Newman, author of Planetfall

An interstellar collision of massive ideas and startling originality.
Zack Jordan, author of The Last Human