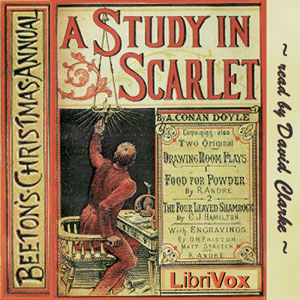 A Study In Scarlet (Version 6)

A Study in Scarlet is a detective mystery novel written by Sir Arthur Conan Doyle, introducing his new characters, "consulting detective" Sherlock Holmes and his friend and chronicler, Dr. John Watson, who later became two of the most famous characters in literature.

Conan Doyle wrote the story in 1886, and it was published the following year. The book's title derives from a speech given by Holmes to Doctor Watson on the nature of his work, in which he describes the story's murder investigation as his "study in scarlet": "There's the scarlet thread of murder running through the colourless skein of life, and our duty is to unravel it, and isolate it, and expose every inch of it." (A "study" is a preliminary drawing, sketch or painting done in preparation for a finished piece.) - Summary by David Clarke

Loved the Book. Narrator was great!

Wow. What a plot twist - or surprise. And excellent narration. Well done!

A classic story of detection and the world's first introduction to Sherlock Holmes. Did not expect the part where you get taken abroad... The narrator shines. Libravox recordings are be a little hit or miss, people learning their craft or their equipment not quite the best quality but this narrator nails it.

Even after 150 years, Sir Arthur Conan Doyle is still at the top. No one can touch him. The narrator too has done an excellent job and justice with all the characters. Excellent!!!

Lovely classic! Excellent narrator!! Perfect length for someone who wants a good story without having to deeply invest in the time. I was pleasantly surprised with the quality of this free title. Highly recommended!

The narrator is very good and the story is fabulous which is not surprising from Conan Doyle. I particularly like the fact it has two stories which ties together nicely in the end.

Another good listen during Covid while walking our 4-5 miles a day. I had never heard of this story before and enjoyed it, especially the part where Holmes first met Dr. Watson. Great story tiring back to events in the U.S. that I will have to research to see if it is historical or fiction. Very good job by narrator!

If you love Sherlock Holmes, you can’t find a better tale than a study in Scarlet. Sir Arthur Conan Doyle always delivers a plot line that allows Holmes to use his powers of observation in the most entertaining fashion.

Great book! The narrator was very on point with character interpretations.

as always, a good read.

I enjoyed the book and the narrator.

A fun listen and David Clark is a wonderful narrator