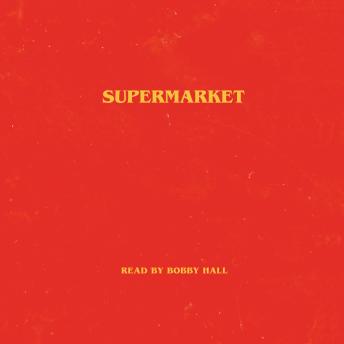 The stunning debut novel from one of the most creative artists of our generation, Bobby Hall, a.k.a. Logic.

“Bobby Hall has crafted a mind-bending first novel, with prose that is just as fierce and moving as his lyrics. Supermarket is like Naked Lunch meets One Flew Over the Cuckoo's Nest—if they met at Fight Club.”—Ernest Cline, #1 New York Times bestselling author of Ready Player One

Flynn is stuck—depressed, recently dumped, and living at his mom’s house. The supermarket was supposed to change all that. An ordinary job and a steady check. Work isn’t work when it’s saving you from yourself. But things aren’t quite as they seem in these aisles. Arriving to work one day to a crime scene, Flynn’s world collapses as the secrets of his tortured mind are revealed. And Flynn doesn’t want to go looking for answers at the supermarket. Because something there seems to be looking for him. A darkly funny psychological thriller, Supermarket is a gripping exploration into madness and creativity. Who knew you could find sex, drugs, and murder all in aisle nine?

Very good book, I love everything about it, worth every penny!!!

The author did a great job narrating the book but I found the plot to be incredibly predictable and far too transparent. Furthermore, the way it “reads” is so casual it’s practically slang- not my favorite. Cuss words were frequent, so if that bothers you at all, don’t read it. I did want to hear more, mostly because the narrating and production of the story was good, and I had hope for a good twist at the end, but overall, the book was a bust for me.

Very good audiobook loved every minute of it!

Couldn’t finish it. Plot twists seem to be predictable. Too “woke” for my taste. Bobby is a good narrator though

Although it's not for everyone, this was a dark, entertaining and somewhat inspiring listen! Bobby was a great narrator, and I really connected to the mental health aspect of the story. Looking forward to more of his works!

Interesting story and the narrator was awesome.

does anyone know the first song for chapter 1?

the plot twists are predictable for the most part. this doesn't stop it from being an extremely enjoyable book. worth getting

really enjoyed Bobby's writing style...clever plot as well enjoyable read he was even better reading it to me...please continue to read all of your future books. kudos!

It’s not what you think even though it kind of is. Great book.