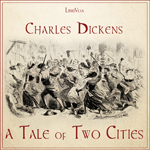 A Tale of Two Cities

A Tale of Two Cities (1859) is a novel by Charles Dickens, set in London and Paris before and during the French Revolution. With well over 200 million copies sold, it is among the most famous works of fiction.

The novel depicts the plight of the French peasantry demoralized by the French aristocracy in the years leading up to the revolution, the corresponding brutality demonstrated by the revolutionaries toward the former aristocrats in the early years of the revolution, and many unflattering social parallels with life in London during the same time period. It follows the lives of several protagonists through these events. The most notable are Charles Darnay and Sydney Carton. Darnay is a French once-aristocrat who falls victim to the indiscriminate wrath of the revolution despite his virtuous nature, and Carton is a dissipated British barrister who endeavours to redeem his ill-spent life out of his unrequited love for Darnay's wife, Lucie Manette.

Hard to follow because it's overly written. Tried to read this several times in college and couldn't get through the first chapter. Pushed through with the audio version and found it interesting, but never did finish it.

This narrator was very good. I enjoyed his time and tempo in the reading of the story. His voice was clear and easy to understand. Very enjoyable

So well read. It is great but very descriptive novel and is so much easier to follow when read so clearly.

Love the reader and love the book. Read the book and have listen to two audiobook presentations.

It was a lot to listen to and I sometimes had a hard time understanding what was going on, there were so many details! But I am 67 years old and have never read a lot of the classics because I did not like to read, so I am so thankful for audio books!

I always wanted to read it but listening has been a real treat.

The narrator was excellent

I don’t like the narrator. Poor accents and tone.

This title is due for release on December 15, 2010
We'll send you an email as soon as it is available!