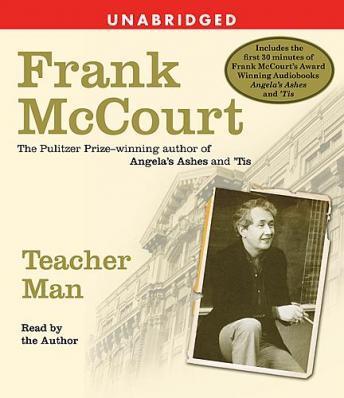 From the Pulitzer Prize-winning, mega-bestselling author who wore his celebrity with extraordinary grace comes a magnificently appealing book about teaching and about how one great storyteller found his voice.

Frank McCourt became an unlikely star when, at the age of sixty-six, he burst onto the literary scene with Angela's Ashes, the Pulitzer Prize-winning memoir of his childhood in Limerick, Ireland. Then came 'Tis, his glorious account of his early years in New York.

Now, here at last is McCourt's long-awaited book about how his thirty-year teaching career shaped his second act as a writer. Teacher Man is also an urgent tribute to teachers everywhere. In bold and spirited prose featuring his irreverent wit and compelling honesty, McCourt records the trials, triumphs and surprises he faced in the classroom. Teacher Man shows McCourt developing his unparalleled ability to tell a great story as, five days a week, five periods per day, he worked to gain the attention and respect of unruly, hormonally charged or indifferent adolescents.

For McCourt, storytelling itself is the source of salvation, and in Teacher Man the journey to redemption -- and literary fame -- is an exhilarating adventure.

How wonderful to hear Frank McCourt read this. His story, his humor and his voice (and a wonderful voice it is). I loved it.

What a gem! Frank McCourt reading Frank McCourt's experiences in the schools of New York City is as good as an audio book can get. With total honesty, McCourt lets us see what makes him such a successful teacher and a compelling human being. I recommend this book to anyone who has ever tried a hand at education, and to all those students who remember their English teachers as people who put their hearts and souls into teaching.

Reading this book, hearing your own accents and dialects will not do it justice. This is a selsection that is actually better when you hear it. A great story, well written with wonderful flow and emotional pull all over the place. Just great. But you have to hear McCourt read it. The Irish droll is REMARKABLY good and works so well for this story. GREAT listen.

You have to like Frank McCourt's style to enjoy this story. I love his lyrical way of telling his view of his life. He keeps me hanging on, even during a dull and sometimes boring section. But it's worth the patience. His life was poor, but his stories are rich. Simple but just Frank McCourt. I loved Angela's Ashes and this didn't disappointment. I've now got to read 'Tis. Can't wait.

Frank McCourt knows how to tell a story. This audiobook was especially entertaining because Mr. McCourt narrates it himself in his lilting Irish brogue. You'll feel like you're sitting in a pub with him lifting a pint, as he regales you with his funny, sometimes heart-breaking stories about teaching in the New York City Public Schools.

What a pleasure to hear that voice. I don't know if it would have been half as good if not for the authenticity of the author's own brogue. As in "Tis," you get the feeling that McCourt is sometimes his own worst ememy and certainly his own most damaging critic. Most would question any desire to become a teacher after hearing his countless descriptions, too. But, just when you wish he would have strangled one of the little malcontents, he reveals that glimmer of hope in them that no doubt kept him striving each day to reach them in a new and different way. What an interesting class he must have conducted in those latter, more mature teaching years.

A must read for teachers! Honest and engaging. The book lagged a bit in the middle and I almost gave up on it, but he recovered his voice and interest for the last third and it ended wonderfully.

Listening to the author read the book added a great deal to my enjoyment of the story. This book was just as enjoyable as 'Tis and is worth a listen.

Frank McCourt's books get better and better. His material gets less shocking and less Irish, but his voice remains just as lyrical. His sense for why he's telling his story improves with each book and his vision of himself gets more honest. That makes this one his most important. It is among the best books I've read this year. I'd recommend it to anyone.

Great insights, light anecdotes, and a fabulous author to read it - what's not to like about this book?

Given the title, I couldn’t help but be worried that Mr. McCort wouldn’t be able to follow up the excellent ANGELA’S ASHES, and the equally-satisfying ‘TIS. I needn’t have worried. McCort’s stories are just as poignant and entertaining as in the first two. I thoroughly enjoyed this book.

A must read for teachers at all levels. It's amazing that I encounter the same issues on the University level that Mr. Mc Court dealt with decades ago. An extra bonus was listening to the author read the book. Yes, I too suffer from "ATTO".

First, hearing any story told by Mr. McCourt is, in my opinion, worth the time spent. As he recalled his teaching of high school (and some college) in NYC area, I could not help but envy his former students, because I had no one comparable to him in my high school or college past. I wonder how many of them appreciated him at the time or appreciate him now. I think anyone who has ever been a teacher could bond with this book. I also believe it could serve as an excellent teaching platform for high school literature courses and intend to give my copy to the head of the English department at our local high school. Despite the frequently encountered Irish-as-victim rhetoric, I loved this book and believe I can be a better citizen and person (one of the reasons I read) for having heard it in the author's own voice.

This title is due for release on November 15, 2005
We'll send you an email as soon as it is available!