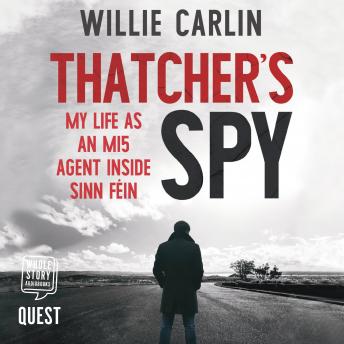 Thatcher's Spy: My Life as an MI5 Agent Inside Sinn Féin

In Thatcher's Spy, the Cold War meets Northern Ireland's Dirty War in the remarkable real-life story of a deep under-cover British intelligence agent, a man now doomed forever to look over his shoulder...

In March 1985, as he climbed the six steps of Margaret Thatcher's prime-ministerial jet on the runway of RAF Aldergrove, little did Willie Carlin know the role Freddie Scappaticci played in saving his life. So began the dramatic extraction of Margaret Thatcher's key undercover agent in Sinn Féin. For 11 years, Willie Carlin worked alongside IRA commander Martin McGuinness in the republican movement's political wing in Derry. He was MI5's man at McGuinness' side and gave the British State unprecedented insight into the IRA leader's strategic thinking. When Carlin's cover was blown in 1985, Thatcher authorized the use of her jet to whisk him to safety. Incredibly, it was another British spy inside the IRA's secretive counter-intelligence unit, the 'nuttin' squad', who saved Carlin's life. This is his story.

Thatcher's Spy: My Life as an MI5 Agent Inside Sinn Féin

This title is due for release on July 2, 2020
We'll send you an email as soon as it is available!