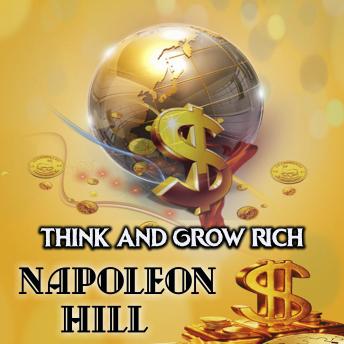 Original 1937 edition. You are currently reading one of the most influential books in the world. Within the pages of this book, you will find the tools, methods, and skills necessary to become a wealthy man. You will learn how to successfully influence the people and situations around you. You will learn about what helps a person propel his life forward, achieve happiness, and increase wealth while others can't seem to even get out of the starting block. What is it that equips some with the strength and energy for the fight while others are left listless? How is it that some can spot potential amidst a tangle of problems and work towards their dreams without stumbling under the cruel winds of fate, while others struggle desperately, making mistake after mistake, without encountering any form of success? Years ago, Napoleon Hill glimpsed the mysterious sparkling gem of success while speaking to Andrew Carnegie, one of the richest men on the planet. Carnegie advised Hill to examine how other successful people obtained wealth and to develop a formula for success that could be an example the world over. This book reveals the Secret of Success and an action plan for achieving it. Since the original 1937 edition, the book has been reprinted 42 times in the United States, selling out immediately upon publication. The book describes the road to sure success: overcoming all obstacles and achieving one's dreams with the sureness of a movie plot propelling the viewer towards the end along the eternal river of time. The book will shake and transform your life with its motivating energy. As you read it, you will understand how self-confident people amass wealth and achieve happiness. Most importantly, you will become such a success story. Napoleon Hill was born in a small cabin in the mountains of Virginia. As a young man, he worked as a newspaper reporter in order to afford his studies at Georgetown University. During WWI, he worked as a public relations expert for President Woodrow Wilson's administration. In 1933, Jennings Randolph, a senator from West Virginia, introduced him to Theodore Roosevelt. Hill again found himself in the role of presidential advisor. After establishing the Napoleon Hill Association in 1952, he actively promoted the philosophy of personal success. He also headed the Napoleon Hill Foundation, a public organization aimed at educating people in the 'science of success'.