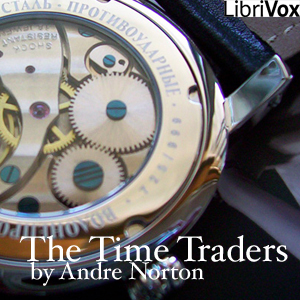 If it is possible to conquer space, then perhaps it is also possible to conquer time. At least that was the theory American scientists were exploring in an effort to explain the new sources of knowledge the Russians possessed. Perhaps Russian scientists had discovered how to transport themselves back in time in order to learn long-forgotten secrets of the past.

That was why young Ross Murdock, above average in intelligence but a belligerently independent nonconformist, found himself on a "hush-hush" government project at a secret base in the Arctic. The very qualities that made him a menace in civilized society were valuable traits in a man who must successfully act the part of a merchant trader of the Beaker people during the Bronze Age.

For once they were transferred by time machine to the remote Baltic region where the Russian post was located, Ross and his partner Ashe were swept into a fantastic action-filled adventure involving Russians, superstitious prehistoric men, and the aliens of a lost galactic civilization that demanded every ounce of courage the Americans possessed. [summary taken from gutenberg e-text]

I think this is probably a very good book, but the narrator sounds like Colonel Sanders with marbles in his mouth. Kinda hard to understand...

Book content is good. The narrator is ( I'm sorry to say) horrible. No inflection in his mono tone voice. Had trouble following the change in characters.

Narrators accent did not seem right for the story

Lot of background noise which is so distracting

The recording quality is so bad that I could only make it through a couple chapters. There is a bad hiss in the background and the narration is so low that it cannot be heard over the hiss. I am glad this was a free book. This is the second Librivox selection that I couldn't finish because of the sound quality.

Reading was so bad

I found the background noise distracted from the story and the narrator. It wasn’t at all necessary. A good story ruined.

Terrible reader couldn’t follow the book at all. Not only was the narrator bad there was a strange high pitch noise or something.

Having read the book years ago, I knew it was exceptionally good. The narrator’s style and voice was not appropriate for this book.

wow, get a microphone. couldn't do the low quality.

I enjoyed the storyline and the writing. The narration was a bit dry for my taste.