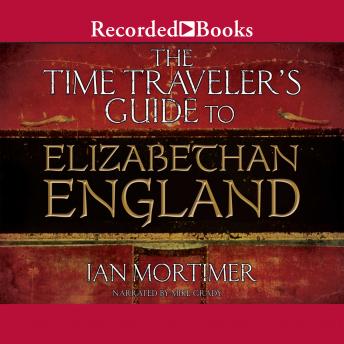 Bestselling author Ian Mortimer created a runaway hit--and put 'medieval history back in the hands of ordinary readers' (Daily Telegraph)--with The Time Traveler's Guide to Medieval England. In this follow-up, Mortimer explores the reign of Queen Elizabeth I. A golden age of maritime heroes like Sir Walter Raleigh and writers such as Shakespeare, Elizabethan England was also an era of violence, famine, and religious persecution. But for all these trials, Elizabeth's subjects settled America, circumnavigated the globe, and laid the groundwork for the modern world.

Interesting but a bit too long. I found the facts hard to absorb as I listened and re-listened to some of them several times in order to understand their significance. Seeing the facts in print would have been easier to understand. I liked the book but was disappointed as I wanted more of the everyday lives and experiences. I found the final chapters of the book full of the authors/literature of the times but it was overkill to listen to all of it. Too long ... too much info.

it was fun going on a tour of Elizabethan England!

I love his books. He has a way of bringing history alive for me and I hope he writes a lot more in the future.

This title is due for release on June 27, 2013
We'll send you an email as soon as it is available!