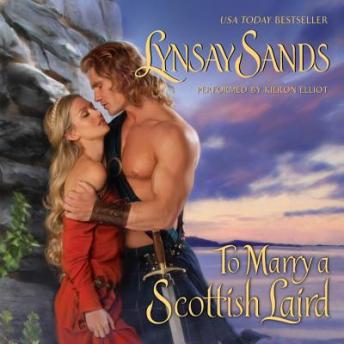 To Marry a Scottish Laird

New York Times bestselling author Lynsay Sands returns to the Highlands of Scotland in her hottest new historical romance yet!

Highlander Campbell Sinclair is no stranger to battle, so when he sees a lad attacked by bandits, he jumps into the fray. He didn't count on being stabbed. Grateful to the boy for nursing him back to health, Cam offers to accompany Jo safely to his destination. But when he accidentally comes across the lad bathing in the river, Cam discovers that Jo is actually Joan . . . with the most sinful of curves.

Joan promised her mother that she would deliver a scroll to the clan MacKay. But traveling alone is dangerous, even disguised as a boy. When a Scottish warrior lends his aid, she is more than relieved . . . until he surprises her with lingering kisses and caresses that prove her disguise hasn't fooled him. As their passion ignites, will the secrets of the scroll force a wedding . . . and lead to a love she's never known?

To Marry a Scottish Laird