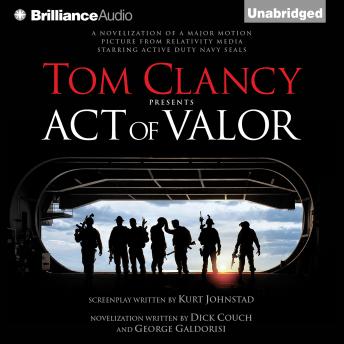 The Navy SEALs have been fighting terrorists around the world for over a decade. And for all that time, the Bandito Platoon SEALS from SEAL Team Seven have been on continuous combat rotation. Now they have drawn a shipboard assignment off Central America—an easy day.

But for a Navy SEAL, the only easy day was yesterday.

Act of Valor takes you deep into the secretive world of today’s most elite, highly trained group of warriors. When the rescue of a kidnapped CIA operative leads to the discovery of a deadly terrorist plot against the United States, a team of SEALs is dispatched on a worldwide manhunt. As the men of Bandito Platoon race to stop a coordinated attack that could kill and wound thousands of American civilians, they must balance their commitments to country, team, and their families back home.

But each time they accomplish their mission, a new piece of intelligence reveals another shocking twist to the plot, which stretches from Chechnya to the Philippines and from Ukraine to Somalia. The widening operation sends the SEALs across the globe as they track the terrorist ring to the U.S.-Mexico border—where they engage in an epic firefight with potentially unimaginable consequences for America…

Loved the book. Great for audio. Reader did a great job of capturing the emotions of the characters and moving the story along.

This title is due for release on January 10, 2012
We'll send you an email as soon as it is available!