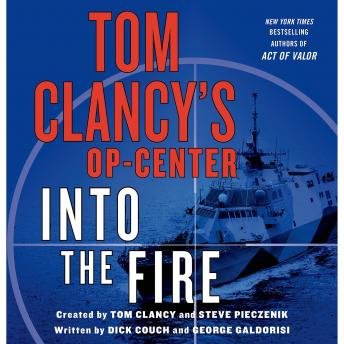 Tom Clancy's Op-Center: Into the Fire: A Novel

Tensions flare in Northwest Asia and Op-Center races to prevent World War III in this chilling, ripped-from-the-headlines thriller from the authors of the USA Today bestseller Out of the Ashes.

When a team of assassins murder a high-ranking North Korean general and his family in their sleep, making it look like a robbery, events are set in motion that could shake the balance of world powers. Meanwhile, a U.S. naval combat ship, the USS Milwaukee, is attacked by North Korean forces in the middle of a training exercise off the shore of South Korea, and Commander Kate Bigelow is forced to ground the ship to avoid being captured. The crew takes refuge on a tiny island, trapped dangerously between the grounded ship and a fleet of hostile North Korean soldiers.

Op-Center intelligence discovers a secret alliance behind the attack—a pact between China and North Korea that guarantees China total control of a vast oil reserve found beneath the Yellow Sea. As both sides marshal their forces for a major confrontation at sea, Chase Williams and his Op-Center organization devise a plan to secretly spirit the American crew from the island and out from under North Korean control. But the North Koreans are not finished. In a desperate gamble, they unleash a terrorist cell on the American homeland. Only Op-Center can uncover their plan and stop it in time to prevent a major catastrophe that could lead to all-out war.

I thought that the story was just fine but as with many of Tom Clancy's books, it sometimes felt like a sales pitch to buy a piece of equipment. The attention to detail is very commendable and shows the amount of research that has been put into the book but personally, I could care less about whose brand or model number any particular piece of apparatus is. The Narration was good but not outstanding. All in all, a good listen story wise although the ending was a bit tame.