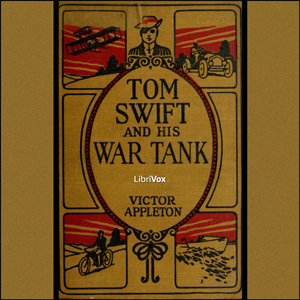 Tom Swift and His War Tank

Tom Swift, that prolific youthful inventor, is engaged in trying to help the Allies win WWI. After reading newspaper accounts of the British tanks, Tom takes a sheet of paper and sets out to design a better one from scratch. And fortunately, he can throw the whole family business behind his venture.

He has two problems: First, his friends and acquaintances are questioning his patriotism because he hasn't enlisted as a rifleman for the front lines. Even his girl is worried his blood isn't true-blue. But that's because he is developing his tank in secret, and they don't know he's concentrating on winning the war the American way, with machines.

The second problem is that the German spies have penetrated the secret of what is being built in the high-security shop on the Swift property. And they will stop at nothing to steal its design - not kidnapping Tom, and not kidnapping the tank itself, complete with crew.

Tom and his buddies had better work fast, or the American riflemen are going to find the Kaiser's soldiers using American-designed tanks against them! (Summary by Mark F. Smith)

Tom Swift and His War Tank