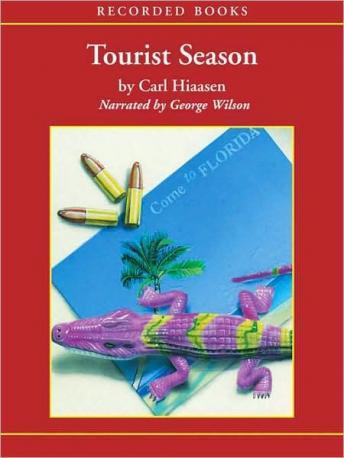 Pulitzer Prize-winning journalist Carl Hiaasen's best-selling novels are funny and sardonic. Hilarious postcards of south Florida, they also decry the lurid commercialism that is draining and paving the tropical landscape. Tourist season is swinging into high gear in Miami. So are the activities of a bizarre terrorist group determined to keep the hapless 'snowbirds' away. Armed with bombs, weed, and jumbled credos, they move toward their grand target, the Orange Bowl Parade, with plans to bring Miami and its tourist trade to a halt. The cast, which includes a deranged journalist, a visionary ex-jock and a lovesick detective, is just the kind of company Carl Hiaasen's fans love to keep. Narrator George Wilson's performance lures each quirky character out into the full light of the Florida sun. With over half a million copies in print, this is one of Hiaasen's most popular works.

This title is due for release on March 5, 2004
We'll send you an email as soon as it is available!