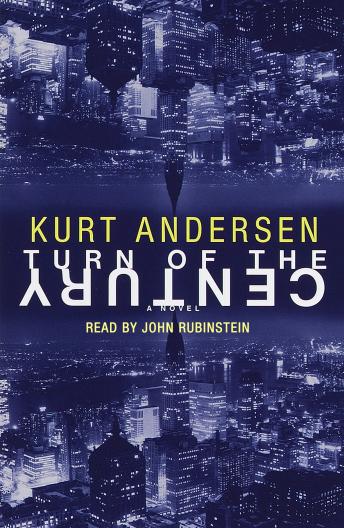 Turn of the Century

As big and exciting as the next century, this is a novel of real life at our giddy, feverish, topsy-turvy edge of the millennium. Turn of the Century is a good old-fashioned novel about the day after tomorrow--an uproarious, exquisitely observed panorama of our world as the twentieth century morphs into the twenty-first, transforming family, marriage, and friendship and propelled by the supercharged global businesses and new technologies that make everyone's lives shake and spin a little faster.

As the year 2000 progresses, George Mactier and Lizzie Zimbalist, ten years married, are caught up in the whirl of their centrifugally accelerating lives. George is a TV producer for the upstart network MBC, launching a truly and weirdly groundbreaking new show that blurs the line between fact and fiction. Lizzie is a software entrepreneur dealing with the breakneck pleasures and pains of running her own company in an industry where the rules are rewritten daily. Rocketing between Los An-geles and Seattle, with occasional stopovers at home in Manhattan for tag-team parenting of their three children, George and Lizzie are the kind of businesspeople who, growing up in the sixties and seventies, never dreamed they would end up in business. They're too busy to spend the money that's rolling in, and too smart not to feel ambivalent about their crazed, high-gloss existences, but nothing seems to slow the roller-coaster momentum of their inter-secting lives and careers.

However, after Lizzie, recovering from a Microsoft deal gone awry, becomes a confidante and adviser to George's boss, billionaire media mogul Harold Mose, the couple discovers that no amount of sophisticated spin can obscure basic instincts: envy, greed, suspicion, sexual temptation--and, maybe, love. When they and their children are finally drawn into a thrilling, high-tech corporate hoax that sends Wall Street reeling (and makes one person very, very rich), George and Lizzie can only marvel at life's oversized surprises and hold on for dear life.

Like Tom Wolfe's Bonfire of the Vanities, Kurt Andersen's Turn of the Century lays bare the follies of our age with laser-beam precision, creating memorable characters and dissecting the ways we think, speak, and navigate this new era of extreme capitalism and mind-boggling technology. Entertaining, imaginative, knowing, and wise, Turn of the Century is a richly plotted comedy of manners about the way we live now.

This title is due for release on May 11, 1999
We'll send you an email as soon as it is available!