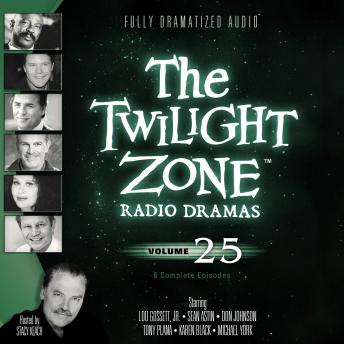 Experience one of television's greatest science fictionseries: The Twilight Zone. Thiscollection of episodes is fully dramatized for audio and features a full cast,music, sound effects, and narration by some of today's biggest celebrities.
Probe 7, Over and Out(starring Lou Gossett, Jr.)
A lone astronaut crash-lands on an unknown planet, leavingbehind a destroyed world. As he is adjusting to the new planet, he discoversanother crashed astronaut, a woman, and together they form an important bond.
Who Am I? (starringSean Astin)
A young businessman wakes up one morning and has a completelydifferent face-but only he thinks it's different from before.
Two (starring DonJohnson)
Two opposing survivors of a world war learn to put asidetheir differences and start a new and better world together.
Young Man's Fancy (starringTony Plana)
A recently married man misses his dead mother and hischildhood so much that he can't seem to live in the here and now, causinguntold horror for his new bride.
The Bewitchin' Pool(starring Karen Black)
Two children of divorcing parents escape through a magicalportal in their pool, into a peaceful world for children.
A Piano in the House(starring Michael York)
Insensitive drama critic Fitzgerald Fortune buys hisyoung wife a player piano as a birthday present. To his surprise, he discoversit has magical properties: its music reveals people's hidden fears, loves,thoughts, and secrets.