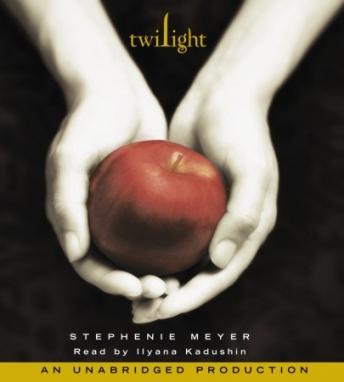 About three things I was absolutely positive:
First, Edward was a vampire.
Second, there was a part of him–and I didn’t know how dominant that part might be–that thirsted for my blood.
And third, I was unconditionally and irrevocably in love with him.

“I’D NEVER GIVEN MUCH THOUGHT TO HOW I WOULD DIE– I’d had reason enough in the last few months –but even if I had, I would not have imagined it like this. . . . Surely it was a good way to die, in the place of something else, someone I loved. Noble, even. That ought to count for something.”
When Isabella Swan moves to the gloomy town of Forks and meets the mysterious, alluring Edward Cullen, her life takes a thrilling and terrifying turn. With his porcelain skin, golden eyes, mesmerizing voice, and supernatural gifts, Edward is both irresistible and impenetrable. Up until now, he has managed to keep his true identity hidden, but Bella is determined to uncover his dark secret.
What Bella doesn’t realize is the closer she gets to him, the more she is putting herself and those around her at risk. And, it might be too late to turn back. . . .
Deeply seductive and extraordinarily suspenseful, Twilight will have readers riveted right until the very last page is turned.

Of course Twilight is a great book, but I could not stand this narrator.

Loved the books when I read them, love them even more listening. Just wish the narrator would have used different voices for the different characters. Maybe I got too spoiled listening to Outlander though :)

I thoroughly enjoy this series of books. The narration while decent did not capture the correct emotion, or inflection of many situations. While many criticize the style of writing and the storytelling, i still find this story very enjoyable.

I love the series!

Love the book but the narration was just awful. Definitely not worth a credit. Pretty disappointed. I highly recommend you pass and pick something else with better narration.

the music in the background is distracting

Love this book! I was overly wrapped up and sucked in. Narration was good. Didn't capture the characters voices or emotions as well as others, but still good.

I did not expect to enjoy this book , let only the whole series. I don't normal like vampire books ,but this was a book that kept me interested and want to keep listening. I am excited for the next book.

The narrator did a good job. I like when the narrator has a nice voice to listen to. Even better if they give each character a different voice or accent. I find it extremely hard to listen to narrator that sounds like a robot ????. Anyways the books series it great. The first book is awesome. I can't wait to start the second book. There is a spoiler alert in a few comments below mine. So if u haven't read the books or seen the movies yet beware.

This book is pretty good

It was the best book ever I can't believe how good it was. The third one was good to she had a baby so it was a little bad ok a lot bad. I liked it when I read it but strangely I liked it even more when I listened to it. In the 2nd it is totally better and the 3rd also the 4th

This is a great app. A love this book!

Awesome. I'm in love with this amazing book series and the narrator makes it a thousand times better

A really, really great book. I recommend it and it is one of the best book ever!

It was good! I wish there had been a man to read the male parts.

Wish I'd read the book first!! Enjoyed the narrator on this one.

I love this book! I could listen to this everyday! great narrator too!

I enjoyed this book but wish I would've read the book before I watched the movie.

what a fantastic book and better than the movie. perfect narrator thankfully as there is nothing worse to kill the mood of the story than a bad narrator

This book is up

I love these books

Love the book but wish the narrator was better. Inflection/emotion was off; pronunciation was off. Sounded a little robotic at times. Makes me not want to listen to the rest f the series since the same narrator does them all. Still live the series though!!

I honestly love this series. Always going back to read again.

Book is amazing of course but the narrator definitely didn’t enjoy reading. Made it hard to listen too.

Loved the book. Read the series first. Then watched the movies. I wanted to try listening to the book. The narrator read well but it was no different than anyone else in the world reading the book aloud. She needed more emotion, inflection, and voice characterization. I probably won’t listen to the rest of the series.

I maybe one of the few but I really like the easy monotone of Ilyana's voice. It relaxes me. I already knew the book so this makes nice listening to unwind before going to sleep.

I absolutely loved listening to this book. Just as good as I remembered it and very well narrated.

I disagree with the negative Narration reviews listed and give 5 stars.

I love this book! I enjoy reading it and listening to the audiobook. This narrator does a wonderful job.

I have seen the movie but not read the book I think it will be awesome.

This title is due for release on September 27, 2005
We'll send you an email as soon as it is available!