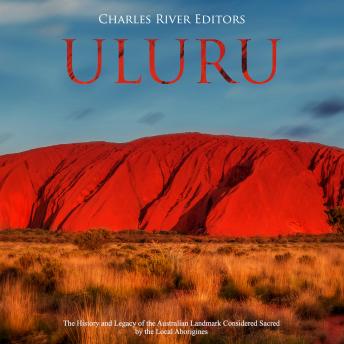 Uluru: The History and Legacy of the Australian Landmark Considered Sacred by the Local Aborigines

The magnificent monolith the locals call "Uluru," situated in the heart of Australia, hovers over a patchy bed of desert poplars and spinifex grasslands. The pleasant, but otherwise unexceptional surroundings of the spellbinding sandstone landform only further accentuates its majesty, one that can be appreciated from a variety of angles. To lime-colored budgerigars, mighty brown falcons, passengers in planes and helicopters, and other creatures blessed with the gift of flight, the free-form rock is reminiscent of the fossil of a spiky fish, a misshapen arrowhead, or perhaps a peculiar, ocher-tinged seashell peeking out of the sand. To those gazing upon the natural gem on solid ground, the flat-topped, burnt sienna beauty, marked with character-forming dimples, ripples, and ridges, looks more like a sleeping, thousand-year-old turtle, particularly through squinted eyes.
Its striking appearance aside, Uluru, also known as "Ayers Rock," is far more than an unmissable landmark. Uluru represents an inimitable symbol of life and culture, and a place of worship sacred to the region's aboriginal inhabitants. Given the long and riveting history attached to this hallowed rock, the aura of mysticality and mystery that clings to Uluru should come as no surprise. Not only does the rock's flaky surface change color throughout the day - going from a deep violet with hints of gray to a light lilac, to a fiery orange-red during sunrise, and from its usual apricot-gold to a faded orange, to a dreamy purplish-pink at dusk - Uluru, they say, is an endless source of inexplicable happenings and paranormal occurrences.

Uluru: The History and Legacy of the Australian Landmark Considered Sacred by the Local Aborigines