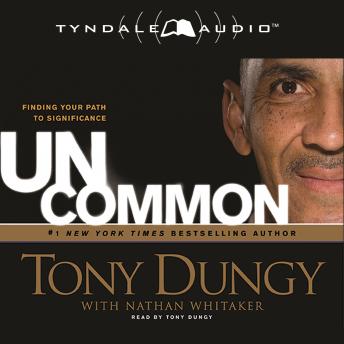 Uncommon: Finding Your Path to Significance

Super Bowl-winning coach and #1 New York Times best selling author Tony Dungy has had an unusual opportunity to reflect on what it takes to achieve significance. He is looked to by many as the epitome of the success and significance that is highly valued in our culture. He also works every day with young men who are trying to achieve significance through football and all that goes with a professional athletic career, such as money, power, and celebrity. Coach Dungy has had all that, but he passionately believes that there is a different path to significance, a path characterized by attitudes, ambitions, and allegiances that are all too rare but uncommonly rewarding. Uncommon reveals lessons on achieving significance that the coach has learned from his remarkable parents, his athletic and coaching career, his mentors, and his journey with God. A particular focus of the book: what it means to be a man of significance in a culture that is offering young men few positive role models.

Uncommon: Finding Your Path to Significance

This title is due for release on January 27, 2009
We'll send you an email as soon as it is available!