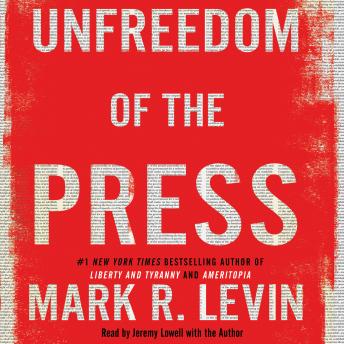 Unfreedom of the Press

Six-time New York Times bestselling author, FOX News star, and radio host Mark R. Levin “trounces the news media” (The Washington Times) in this timely and groundbreaking book demonstrating how the great tradition of American free press has degenerated into a standardless profession that has squandered the faith and trust of the public.

Unfreedom of the Press is not just another book about the press. In “Levin’s finest work” (Breitbart), he shows how those entrusted with news reporting today are destroying freedom of the press from within—not through actions of government officials, but with its own abandonment of reportorial integrity and objective journalism.

With the depth of historical background for which his books are renowned, Levin takes you on a journey through the early American patriot press, which proudly promoted the principles set forth in the Declaration of Independence and the Constitution. This is followed by the early decades of the Republic during which newspapers around the young country were open and transparent about their fierce allegiance to one political party or another.

It was only at the start of the Progressive Era and the 20th century that the supposed “objectivity of the press” first surfaced, leaving us where we are today: with a partisan party-press overwhelmingly aligned with a political ideology but hypocritically engaged in a massive untruth as to its real nature.

Excellent!! An in depth view of the fake and dishonest media and how they hold the general population in contempt while trying to manipulate democratically elected governments. The underhanded tactics and corruption of the media is laid bare in this excellent book by the incomparable Mark Levin

This book does not have the red meat you would expect from Mark R. Levin. It's an academic book. The unfreedom of the press illustrates how the modern media has squeezed and twisted itself intellectually to craft narratives and interpretations that are as absurd as a monty python skit. The book goes into a lot of history, talks about historic figures and lays bare, the dis-ingenuousness of the bourgeois. If you are listening higher speeds like I like to, unfortunately there isn't much I can take to a cocktail party. But it's still a worthwhile read. I believe the book does not lie or exaggerate. It is pretty much on the mark. This is the kind of book I expect from Mark Levin (just like his Liberty and Tyranny) and if you listen to it twice, you will get more out of it.

Very informative but long on narrative. I grew a little bored but I am a news junkie so knew a lot of this from studying history of politics. Unfreedom- Mark Levin