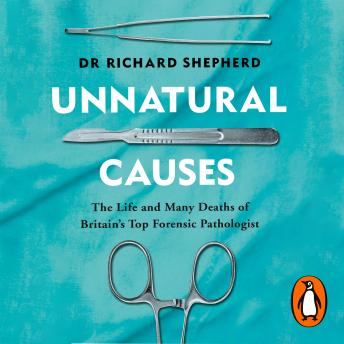 Meet the forensic pathologist, Dr Richard Shepherd, in the true crime book of the year - brought to you by Penguin.

'The dead do not hide the truth and they never lie. Through me the dead can speak . . .'

He solves the mysteries of unexplained or sudden death.
He has performed over 23,000 autopsies, including investigating some of the most high-profile cases of recent times; the Hungerford Massacre, the Princess Diana inquiry, and 9/11.
He has faced serial killers, natural disasters, 'perfect murders' and freak accidents.
His evidence has put killers behind bars, freed the innocent, and turned open-and-shut cases on their heads.
Yet all this has come at a huge personal cost.

Written and narrated by Dr Richard Shepherd, Unnatural Causes tells the story of not only the cases and bodies that have haunted him the most, but also how to live a life steeped in death.

What an interesting life and predictably traumatic for anyone to have to endure. A cathartic process but a fascinating tale that needed to be told. As a medical professional I learnt some facts that will help me in my daily job, the dead really can teach us so much.

A book of great interest guiding the reader/ listener through the mysterious and exciting world of forensic medicine, as well as police crime investigation and the legal aspects

Great book. Love the details of the many cases!

My first audiobook... I really enjoyed it!

Book was interesting and enlightening about life of a forensic pathologist.

Fabulous book. Read by the author and.... oh I just completely recommend it!!!

This title is due for release on September 20, 2018
We'll send you an email as soon as it is available!