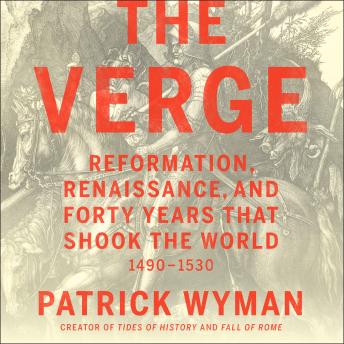 The Verge: Reformation, Renaissance, and Forty Years that Shook the World

The creator of the hit podcast series Tides of History and Fall of Rome explores the four explosive decades between 1490 and 1530, bringing to life the dramatic and deeply human story of how the West was reborn.

In the bestselling tradition of The Swerve and A Distant Mirror, The Verge tells the story of a period that marked a decisive turning point for both European and world history. Here, author Patrick Wyman examines two complementary and contradictory sides of the same historical coin: the world-altering implications of the developments of printed mass media, extreme taxation, exploitative globalization, humanistic learning, gunpowder warfare, and mass religious conflict in the long term, and their intensely disruptive consequences in the short-term.

As told through the lives of ten real people—from famous figures like Christopher Columbus and wealthy banker Jakob Fugger to a ruthless small-time merchant and a one-armed mercenary captain—The Verge illustrates how their lives, and the times in which they lived, set the stage for an unprecedented globalized future.

Over an intense forty-year period, the seeds for the so-called "Great Divergence" between Western Europe and the rest of the globe would be planted. From Columbus's voyage across the Atlantic to Martin Luther's sparking the Protestant Reformation, the foundations of our own, recognizably modern world came into being.

For the past 500 years, historians, economists, and the policy-oriented have argued which of these individual developments best explains the West's rise from backwater periphery to global dominance. As The Verge presents it, however, the answer is far more nuanced.

Verge: Reformation, Renaissance, and Forty Years that Shook the World