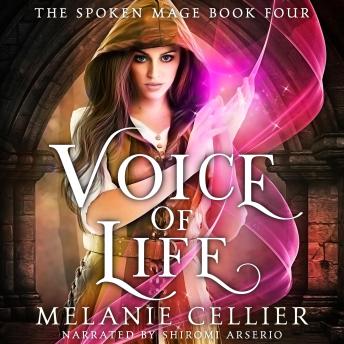 Voice of Life is the fourth and final audiobook in the Spoken Mage series.

In her fourth year at the Academy, Elena should be focusing on final exams and graduation. Instead, she has no choice but to stop a decades-long war - at least, if she wants any future with Lucas.

But it's hard to stop a war when you're nowhere near the front lines. And an unexpected invitation - one she can't refuse - only complicates the matter further. Embroiled in political machinations beyond her experience, Elena will have to plumb the depths of her remarkable power and new abilities.

As she finally learns who she can and can't trust, she'll risk everything to win a future for herself, her family, and her kingdom. But if she makes a misstep, the price could be more than she's willing to pay.

This title is due for release on August 8, 2019
We'll send you an email as soon as it is available!