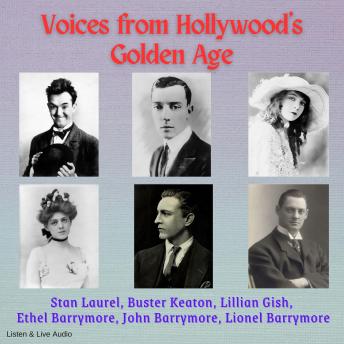 Stan Laurel, was an English comic actor, writer and film director, most famous as Laurel of comedic duo Laurel and Hardy. Laurel's career stretched between 1917 and 1951, and included a starring role in the 1932 film The Music Box. Buster Keaton was an American actor, vaudevillian, comedian, filmmaker, stunt performer, and writer. He was best known for his silent films, in which his trademark was physical comedy with a consistently stoic, deadpan expression. Keaton's most enduring feature-length film was the 1927 The General. Lillian Gish was an American stage, screen and television actress, director and writer whose film acting career spanned from 1912 to 1987. She was particularly associated with the films of director D. W. Griffith, including her leading role in one of the highest grossing films of the Silent era, Birth of a Nation in 1915. Ethel Barrymore was the sister of actors John Barrymore and Lionel Barrymore, the aunt of actor John Drew Barrymore, and the grand-aunt of actress Drew Barrymore. Barrymore won the Oscar for Best Supporting Actress for her role in the 1944 film None but the Lonely Heart opposite Cary Grant. John Barrymore was a member of the Drew and Barrymore theatrical dynasties. He began his career in 1903 and first gained attention as a stage actor in light comedy, then high drama, culminating in productions of Justice, Richard III and Hamlet. Lionel Barrymore was an American actor of stage, screen and radio as well as a film director. He won an Academy Award for Best Actor for his performance in 1931's A Free Soul, and remains perhaps best known for the role of the villainous Mr. Potter character in Frank Capra's 1946 film It's a Wonderful Life.

This title is due for release on February 13, 2016
We'll send you an email as soon as it is available!