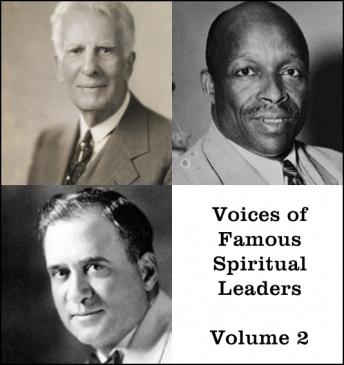 William Bell Riley (March 22, 1861 - December 5, 1947) was known as "The Grand Old Man of Fundamentalism." Born and educated in Indiana, Riley received his teacher's certificate and, later, graduated from the Southern Baptist Theological Seminary in Louisville, KY. He served several Baptist churches in Kentucky, Indiana, and Illinois before taking the pastorate at the First Baptist Church in Minneapolis, MN, in 1897. Father Divine (1876 - 1965), also known as Reverend Major Jealous Divine, was an African American spiritual leader from 1907 until his death. He founded the International Peace Mission movement, formulated its doctrine of economic independence and racial equality, and oversaw its growth from a small and predominantly black congregation into a multiracial and international church. Homer Alvan Rodeheaver (October 4, 1880 - December 18, 1955) was an American evangelist, music director, music publisher, composer of gospel songs, and pioneer in the recording of sacred music. From 1910 to 1930, he served as musical director for Billy Sunday, the most popular evangelist of the period, using his baritone voice to good effect as a soloist and as a participant in ensembles composed of other members of Sunday's evangelistic team.

This title is due for release on November 2, 2016
We'll send you an email as soon as it is available!