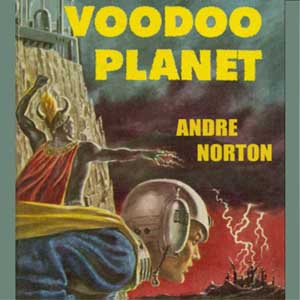 The sequel to Plague Ship, Voodoo Planet finds the Solar Queen banned from trade and starting her supposed quiet two-year stint as an interstellar mail carrier. But instead her crew accepts a visit to the safari planet of Khatka, where they find themselves caught in a battle between the forces of reason and the powers of Khatka's mind-controlling wizard. (Summary by Mark Nelson)

Any book narrated by Mark Nelson starts at a 4 and can only go up. He is in the top 3 best narrators group. This book was a good read. Good action and moved along well without any very dull areas. I would definitely recommend this book to anyone.

The sequel is just as good as the original. Love this timeless author, this talented narrator, and these stories.

This is the sequel to “Plague Ship”

This is an entertaining, quick, vintage sci fi. There are less than a handful of crew on the Solar Queen as it starts a demoted trek from trade to international a mail carrier. Before their route begins, they are visited by a chief ranger seeking help on his home planet Khatka. Khatka is a colony planet inhabited by descendants of people from Africa who escaped from Earth. The people have developed special skills and developed a combined clan effort to promote a successful luxury hunting vacation to the wealthy in the universe. But there appears to be a new problem with poachers and one of the clan families is becoming unstable. Chief Ranger, Kort Asaki, asks the Captain to come with his Medic Tau to observe and, if needed, intervene to challenge an unstable ‘witch’ doctor. Dale, the Queen’s “general errand boy” is fortunate to get to travel on the unexpected safari. The investigative team arrives at a game park to be greeted with a frightening display of a hypnotic dance that resembles voodoo rituals (thus the title Voodoo Planet). They set off on a journey over the mountains where teams have gone but never returned. Can they survive the natural dangers, the hallucinations and the threats of human enemies? This read fine as a stand-alone although it is apparently a sequel. The story is told in third person with a good blend of dialogue and narrative. There is plenty of action and intrigue. I liked the ironic trick that was used to face the magic. I enjoy reading Andre Norton especially when I realize that she is a female author who wrote in 1950s. Audio Notes: Mark Nelson does a nice job narrating this as a public domain work. Although he doesn't focus on voice characters, he still gives energy to the story. I am glad I listened to this on audio.

I enjoyed this book. I found it a lot of fun. Light reding.