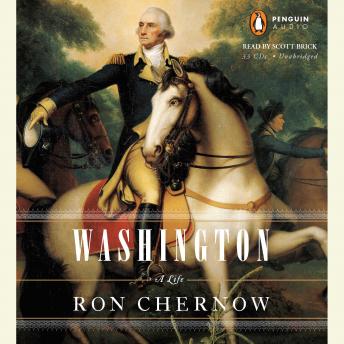 Winner of the Pulitzer Prize and a New York Times Bestseller, a landmark biography of George Washington.

In Washington: A Life celebrated biographer Ron Chernow provides a richly nuanced portrait of the father of our nation. With a breadth and depth matched by no other one-volume life of Washington, this crisply paced narrative carries the reader through his troubled boyhood, his precocious feats in the French and Indian War, his creation of Mount Vernon, his heroic exploits with the Continental Army, his presiding over the Constitutional Convention, and his magnificent performance as America's first president.

Despite the reverence his name inspires, Washington remains a lifeless waxwork for many Americans, worthy but dull. A laconic man of granite self-control, he often arouses more respect than affection. In this groundbreaking work, based on massive research, Chernow dashes forever the stereotype of a stolid, unemotional man. A strapping six feet, Washington was a celebrated horseman, elegant dancer, and tireless hunter, with a fiercely guarded emotional life. Chernow brings to vivid life a dashing, passionate man of fiery opinions and many moods. Probing his private life, he explores his fraught relationship with his crusty mother, his youthful infatuation with the married Sally Fairfax, and his often conflicted feelings toward his adopted children and grandchildren. He also provides a lavishly detailed portrait of his marriage to Martha and his complex behavior as a slave master.

At the same time, Washington is an astute and surprising portrait of a canny political genius who knew how to inspire people. Not only did Washington gather around himself the foremost figures of the age, including James Madison, Alexander Hamilton, John Adams, and Thomas Jefferson, but he also brilliantly orchestrated their actions to shape the new federal government, define the separation of powers, and establish the office of the presidency.

In this unique biography, Ron Chernow takes us on a page-turning journey through all the formative events of America's founding. With a dramatic sweep worthy of its giant subject, Washington is a magisterial work from one of our most elegant storytellers.Ron Chernow's new biography, Grant, will be published by Penguin Press in October 2017.

Although this book gave loads of information and detail I couldn’t get past how the author jumped around with his dates of different events. I often found myself confused with what was happening if wasn’t paying 100% attention or I was interrupted for some reason and was forced to stop listening. Aside from that I truly did appreciate the information and at times, humor that the author portrayed.

Another enjoyable read about a founder by this author. Plan on reading Grant next!

A remarkable story of the making of America...and an intimate dive into all that was Washington. The days of Washington were one of personal sacrifice and continued learning.

Fantastic, well researched and great insights into Washington, the founders and the many tools of founding this nation.

This book breathed humor, deference and adoration for our first President. I always had expected our founding father’s to be intelligent, as most were lawyers, but learning how well rounded Washington was be it agriculture, politics, or philosophy he shined. I enjoyed it so much, that I not only restarted the book after completing, I also took a trip to Washington, DC a week later to imbibe all that was George Washington.

Well researched and written. Great book on our founding fathers. Gives a comprehensive view of the toils of our early independence and how it all started. A must read for any person interested in how our government was constructed and the lives of those who constructed it. Fascinating.

I agree with everyone else who has listened to/read this book: It's fantastic. Looking forward to Chernow's Grant. Scott Brick is also fantastic. I'd enjoy listening to him read the phone book.

This book was absolutely fascinating! I learned about George Washington, the General and the President, in school. However, you get to know him so much better here!

Thoroughly enjoyable with excellent narration. I would absolutely recommend the book, especially good reading on a long flight because it kept my interest.

very interesting and well read from being to the end

If you are ordering this book, you clearly have a taste for history as this 33 CD set is no small undertaking. It is a very thorough account of GW and the surrounding times. It was a really excellent primer for Early-American History. I gave it four stars because it is so thorough and well written however, the author likes to look at that period through the critical eye of modern culture, to the point of becoming preachy and irritating. This behavior is felt most strongly in the judging of GW and his relationship with slavery. He also clearly has no love for the Adamses. If it were not for the preaching on those two issues, it was a very enjoyable (if long) account of the life and times of our first president.

This title is due for release on October 5, 2010
We'll send you an email as soon as it is available!