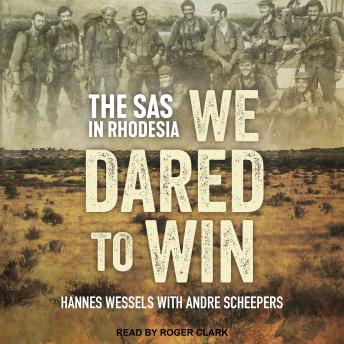 We Dared to Win: The SAS in Rhodesia

Andre Scheepers grew up on a farm in Rhodesia, learning about the bush from his African childhood friends, before joining the army. A quiet, introspective thinker, Andre started out as a trooper in the SAS before being commissioned into the Rhodesian Light Infantry Commandos, where he was engaged in fireforce combat operations. He then rejoined the SAS. Wounded thirteen times, his operational record is exceptional even by the tough standards that existed at the time. He emerged as the SAS officer par excellence; beloved by his men, displaying extraordinary calmness, courage, and audacious cunning during a host of extremely dangerous operations. Andre writes vividly about his experiences, his emotions, and his state of mind during the war, and reflects candidly on what he learned and how war has shaped his life since.

In addition to Andre's personal story, this book reveals more about some of the other men who were distinguished operators in SAS operations during the Rhodesian War.

We Dared to Win: The SAS in Rhodesia