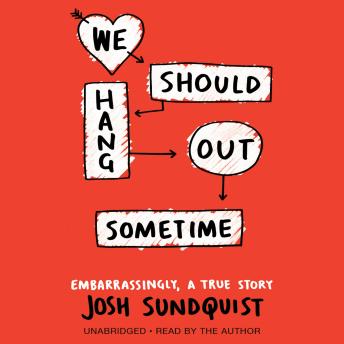 We Should Hang Out Sometime: Embarrassingly, a true story

When I was twenty-five years old, it came to my attention that I had never had a girlfriend. At the time, I was actually under the impression that I was in a relationship, so this bit of news came as something of a shock.

Why was Josh still single? To find out, he tracked down each of the girls he had tried to date since middle school and asked them straight up: What went wrong?

The results of Josh's semiscientific investigation are in your hands. From a disastrous Putt-Putt date involving a backward prosthetic foot, to his introduction to CFD (Close Fast Dancing), and a misguided 'grand gesture' at a Miss America pageant, this story is about looking for love--or at least a girlfriend--in all the wrong places.

Poignant, relatable, and totally hilarious, this memoir is for anyone who has ever wondered, 'Is there something wrong with me?'

(Spoiler Alert: the answer is no.)

Fun story to listen to. Great for long drives and just want a laugh.

Really a book for high school/early college kids. This was so elementary. Really nice but sheltered dude. No hard life has been done here.

This title is due for release on December 23, 2014
We'll send you an email as soon as it is available!