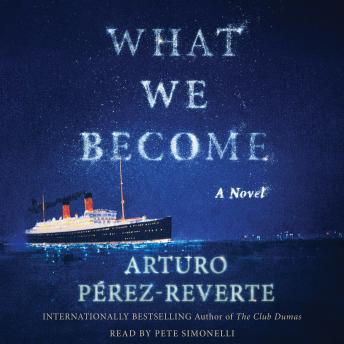 What We Become: A Novel

“Sparkling with witty dialogue, this elegantly translated thriller is enthusiastically recommended to sophisticated readers and those who wish to be.” – Library Journal (starred review)

In 1928, aboard the Cap Polonio—a lavish transatlantic cruise ship bound for Buenos Aires—Max Costa locks eyes with Mecha Inzunza across the first-class ballroom. They are an unlikely match. He is a thief, sleek and refined, hired to dance with unaccompanied passengers. She is the elegant wife of an accomplished composer, accustomed only to luxury. But as they embrace in a fiery tango, a steamy and dangerous love affair ignites—following them from the ship’s gentle sways in the Atlantic night to the seedy decadence of Buenos Aires. Yet as quickly as their affair begins, the two lovers are torn apart.

In Nice, 1937, Max and Mecha’s lives intersect for a second time and they rekindle their dalliance with ease. But in the wake of a perilous mission gone awry, Mecha looks after her charming paramour until a deadly encounter with a Spanish spy forces Max to flee.

Decades later in Sorrento at the height of the Cold War, Max once again runs into trouble—and Mecha. Their attraction is undeniable but with KGB agents on Max’s trail, the small glimmer of hope is becoming increasingly dim.

A mesmerizing tale of love and adventure, espionage and honor, What We Become is Arturo Pérez-Reverte at his finest, with elegant prose reminiscent of his beloved novel, The Club Dumas. Sweeping through time and across borders, What We Become proves that love, much like a great novel, is timeless and enduring.

What We Become: A Novel