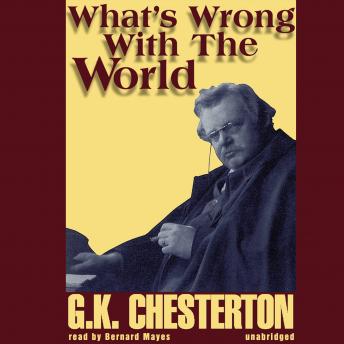 What’s Wrong with the World

In this important book, G.K. Chesterton offers a remarkably perceptive analysis of social and moral issues, even more relevant today than in his own time. With a light, humorous tone but a deadly serious philosophy, he comments on errors in education, on feminism vs. true womanhood, on the importance of the child, and other issues, using incisive arguments against the trendsetters’ assaults on the common man and the family.
Chesterton possessed the genius to foresee the dangers of implementing modernist proposals. He knew that lax moral standards would lead to the dehumanization of man. In this book, he staunchly defends the family against those ideas and institutions that would subvert it and thereby deliver man into the hands of the servile state. In addressing what is wrong, he also shows clearly what is right, and how to change things in that direction.

What’s Wrong with the World

This title is due for release on March 14, 2014
We'll send you an email as soon as it is available!