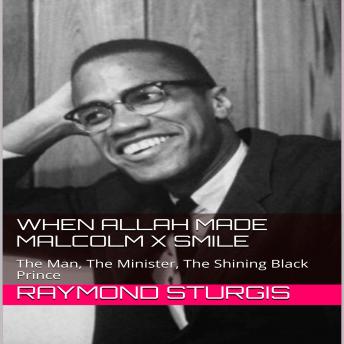 When Allah Made Malcolm X Smile: The Man, The Minister, The Shining Black Prince

It is a great honor for me to present a book on one of the world's greatest champions of humanity. Malcolm X had principles that enabled him to see the true worth of people, especially the oppressed or downtrodden because he could express their pain and frustrations more effectively. Malcolm X experienced the same atrocities and vices that bechance many black men today.

From drugs, alcoholism, gambling, crime, and prostitution, Malcolm X understood the problems of the black community and later dedicated his life helping black America to change them. Malcolm X may not have gotten the same notoriety as Martin Luther King Jr. when he was alive, however, the Black Panthers and Black Nationalist Movement was overwhelmingly inspired by his teachings, and later on, quietly, so was Dr. King. In addition, Malcolm X, challenges everyone from the grave, to positively change his or her families and communities from self-destruction. Today, the black family and communities are in disarray, and as I write this, black children are kidnapped from loved ones, murdered, while black men are killing one another senselessly. We must celebrate the life of Malcolm X with the conviction of enriching the economic power in black communities, instead of empowering the hopelessness and criminals in the black communities and families with silence and fear.

When Allah Made Malcolm X Smile: The Man, The Minister, The Shining Black Prince

This title is due for release on November 17, 2017
We'll send you an email as soon as it is available!