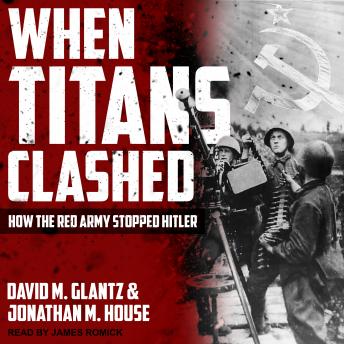 When Titans Clashed: How the Red Army Stopped Hitler

Revised and updated to reflect recent Russian and Western scholarship on the subject, this new edition maintains the 1995 original's distinction as a crucial volume in the history of World War II and of the Soviet Union and the most informed and compelling perspective on one of the greatest military confrontations of all time.

In 1941, when Pearl Harbor shattered America's peacetime pretensions, the German blitzkrieg had already blasted the Red Army back to Moscow. Yet, less than four years later, the Soviet hammer-and-sickle flew above the ruins of Berlin, stark symbol of a miraculous comeback that destroyed the Germany Army and put an end to Hitler's imperial designs. Drawing on the massive and unprecedented release of Soviet archival documents, David Glantz and noted military historian Jonathan House expand and elaborate our picture of the Soviet war effort.

Rafts of newly available official directives, orders, and reports reveal the true nature and extraordinary scale of Soviet military operations as they swept across the one thousand miles from Moscow to Berlin, featuring stubborn defenses and monumental offensives and counteroffensives and ultimately costing the two sides combined a staggering twenty million casualties.

This title is due for release on March 15, 2022
We'll send you an email as soon as it is available!