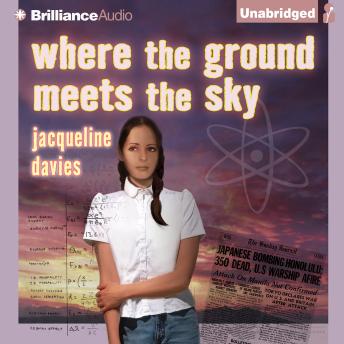 Where the Ground Meets the Sky

One morning, twelve-year-old Hazel wakes to discover that her father, a brilliant physicist, has moved away in the middle of the night. It's 1944, and Hazel's father has agreed to help the U.S. government develop a secret weapon that will win World War II. His decision turns Hazel's world upside-down - soon, she and her mother move out west to be with him, to a strange town with no name that everyone calls "the Hill." The Hill is surrounded by a chain-link fence and barbed wire. Armed guards patrol its perimeter night and day. With her new friend, Eleanor, Hazel goes on secret missions to try and solve the many mysteries that the Hill hides. Who is sending secret radio messages from the base? What happened to Eleanor's cat? And most importantly, what is the mysterious "gadget" that the scientists are building day and night? "This suspenseful story successfully captures the tensions of a volatile period in American history as the atomic bomb was being developed. Readers will be left with plenty to think about and no simple answers." -School Library Journal

Where the Ground Meets the Sky

This title is due for release on November 27, 2012
We'll send you an email as soon as it is available!