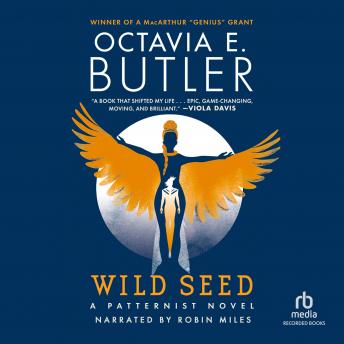 DDoro knows no higher authority than himself. An ancient spirit with boundless powers, he possesses humans, killing without remorse as he jumps from body to body to sustain his own life. With a lonely eternity ahead of him, Doro breeds supernaturally gifted humans into empires that obey his every desire. He fears no one—until he meets Anyanwu. Anyanwu is an entity like Doro and yet different. She can heal with a bite and
transform her own body, mending injuries and reversing aging. She uses her powers to cure her neighbors and birth entire tribes, surrounding herself with kindred who both fear and respect her. No one poses a true threat to Anyanwu—until she meets Doro. The moment Doro meets Anyanwu, he covets her, and from the villages of seventeenth-century Nigeria to nineteenth-century United States, their courtship becomes a power struggle that echoes through generations, irrevocably changing what it means to be human.

I didn't know what to expect from this, but Butler is amazing as always!

Such an interesting premise. It is an unusual book, and for me it was enough to keep listening to it. I enjoyed the narrator's pronounciation very much as well.

I loved this book, narrator was super. I wish the whole series was available on the app.

The premise Butler explores in this book is less interesting and compelling than others of her works. It is unrelentingly dark, without enough plot or compelling enough characters to make me feel it was worth it to wade through the violence and abuse. However there were some interesting situations and ideas explored, and apart from wishing the characters were more well-rounded Butler’s writing style is good. I did listen to the whole thing, but would only recommend it with reservations.

Anachronistic in the extreme, almost deviant in its constant unimaginative rehashing of various forms of subjugation. Certainly not enough narrative or character development to carry me through.

I loved the story. It felt like a recent failed relationship lived through time and time again. Not a fan of the male protagonist but enjoy the way his hypnotism makes him irresistible. In short, the OG toxic relationship.

This book was just awful. The end was just like the beginning. No real story line or depth. The characters did not develop. The narrator did not use different voice reflection to differentiate between characters so if you don’t listen closely it is hard to follow which one of the characters she is portraying. I do not recommend.

I loved it! At first I was confused then I basically started watching it in my mind like a movie.