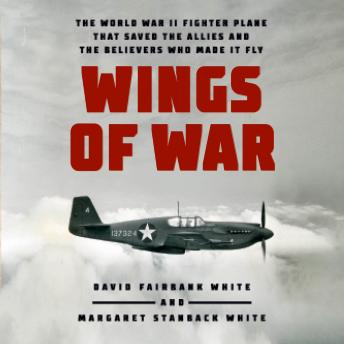 Wings of War: The World War II Fighter Plane that Saved the Allies and the Believers Who Made It Fly

The incredible, untold story behind the rise of the P-51 Mustang, the World War II fighter plane that destroyed the Luftwaffe and made D-Day possible

“Aviation buffs will cheer this high-flying saga.”—Publishers Weekly • “[A] fascinating book about passion and innovation.”—Walter Isaacson • “An essential book for those who appreciate tales of military bravery, and also for all seeking understanding of decision-making under pressure. A major contribution.”—E. J. Dionne, Jr.

When the P-51 Mustang began tearing across European skies in early 1944, the Allies had been losing the air war for years. Staggering numbers of bomber crews, both British and American, had been shot down and killed thanks to the Luftwaffe’s superior fighter force. Not only did the air war appear grim, but any landing of troops in France was impossible while German fighters hunted overhead. But behind the scenes, a team of visionaries had begun to design a bold new type of airplane, one that could outrun and outmaneuver Germany’s best.

Wings of War is the incredible true story of the P-51 Mustang fighter and the unlikely crew of designers, engineers, test pilots, and army officers who brought it from the drafting table to the skies over World War II. This is hardly a straightforward tale of building an airplane—for years, the team was stymied by corruption within the defense industry and stonewalled by the Army Air Forces, who failed to understand the Mustang’s potential. But when squadrons of Mustangs were finally unleashed over Hitler’s empire, the Luftwaffe was decimated within months, clearing the skies for D-Day. A compelling, character-focused narrative replete with innovation, determination, and bravery, Wings of War is the never-before-told story of the airplane that truly changed the course of World War II.

Book narrative was overly dramatized. Multiple redundancies of information as the book progressed. Would have liked to see more focus on the plane than drifting into tangents on the air war