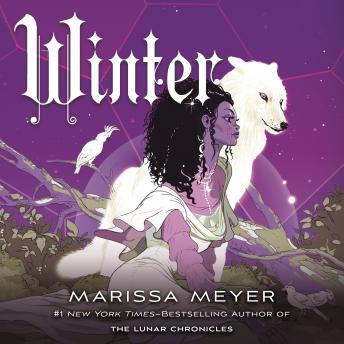 #4 of The Lunar Chronicles

Princess Winter is admired by the Lunar people for her grace and kindness, and despite the scars that mar her face, her beauty is said to be even more breathtaking than that of her stepmother, Queen Levana.

Winter despises her stepmother, and knows Levana won't approve of her feelings for her childhood friend--the handsome palace guard, Jacin. But Winter isn't as weak as Levana believes her to be and she's been undermining her stepmother's wishes for years. Together with the cyborg mechanic, Cinder, and her allies, Winter might even have the power to launch a revolution and win a war that's been raging for far too long.

Can Cinder, Scarlet, Cress, and Winter defeat Levana and find their happily ever afters? Fans will not want to miss this thrilling conclusion to Marissa Meyer's national bestselling Lunar Chronicles series.

The audio includes an interview between the author and the narrator.

It's over. Wahahhahahah. I know the series had to end sometime, but . . . . Winter held my attention so much that I didn't want to do anything else but listen to the book. It was action-packed, funny and I loved and hated the characters. I will just have to read more Marissa Meyer books to see if she can do it again.

Great way finish this exciting book series, wish there was more but all good things must come to an end. Kinda a long book, but definitely worth your time, the story had great characters that have very much their own personality and you will relate to one of the characters if not all to the characters in some way or another. I loved it and if you like Star Wars and fairy tales you'll love these books too.

I found this book great, but stressful lol enjoyed this one as much as the others so far.

I am going to be so sad when this series is over. Rebecca Soler Is AMAZING and I can’t imagine anyone else narrating.

Love love love this narrator. Even my three year old enjoys listening to her, and if you've ever met a three-year old, there isn't much that keeps their attention! Can I give her more stars? This series was a lot of fun to read. I became pretty attached to the characters. Well done!

what can I say whats a Myers his an amazing writer I enjoyed hearing /reading along with this amazing book it captures the imagination of someone who loves the adventure and beauty of everything. I hope you enjoy this book as much as I did

Such a fabulous book! And the series is truly amazing! Me and my sister give it a complete five stars!!

A must read series! You won't want to wait to start the next one as soon as you end one. Its sweet and action packed. Funny and moving. All you can want in one series!

Concludes the series very nicely although, this book could've been spilt into 2 separate books. This book is quite long.

Thank you for a great entertaining series! I fell in love with the characters and both of my kids thought Jason was wonderfully romantic.

I loved the series, didn't want it to end. I hope she does more fairy tale books.

Wonderful series. Sad it had to end. It will be hard to let go of the characters and all the things they will do in their future.

Wonderful book loved it . Narrative is great. Loved the premise.

This was an excellent listen. I enjoyed the whole Lunar Chronicles series.

This title is due for release on November 10, 2015
We'll send you an email as soon as it is available!