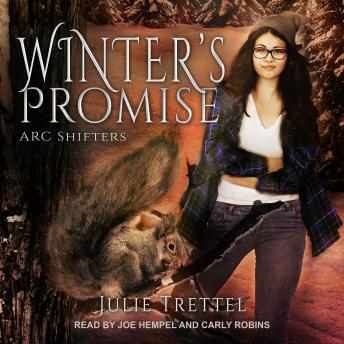 Ember 'Emmy' Kenston was raised in the spotlight when all she wanted was to be invisible. A self-proclaimed book nerd, she must live up to the expectations of being the daughter of one of Hollywood's biggest actresses. Retreating to Archibald Reynolds College gives her a fresh start where she attends classes and happily spends her evenings in the library trying not to be noticed, but Chad notices anyway.

Chad is a squirrel shifter and the only non-canine in the D.O.G. House. He's totally gorgeous, in the warmer seasons at least, and has made quite the name for himself around campus. Most of the school year he has girls throwing themselves at him, but he's seen how his brothers are with their true mates, and wants nothing less than to be loved for who he is, not for his summer body. As long as she's a squirrel of course.

Longing for a mate in no way prepares him for the moment when he first hears her inside his head. The problem is, Ember doesn't know what's happening. And worse, Chad's biggest fear is realized . . . her animal spirit is not a squirrel.

Can Chad push past his prejudices and accept her as his mate? Or will he turn away from his one true mate forever?

I love all of her books. I love how each series ties into the others. The narrator is great too.