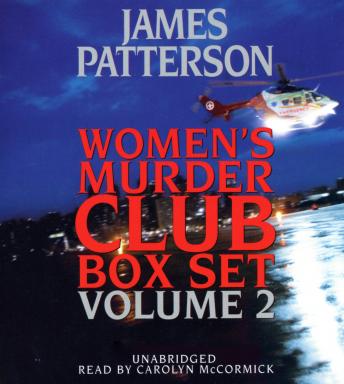 The 4th of July
In a late-night showdown after a near-fatal chase, San Francisco police lieutenant Lindsay Boxer has to make an instantaneous decision -- and sets off a chain of events that leaves a police force disgraced and an entire city divided. As summer comes into full swing, Lindsay and her friends in the Women's Murder Club battle for her life on two fronts: before a judge an jury as her trial comes to a climax, and facing unknown adversaries who will do anything to keep her from the truth.

The 5th Horseman
It is a wild race against time as Lieutenant Lindsay Boxer and the newest member of the Women's Murder Club, attorney Yuki Castellano, lead an investigation into a string of mysterious patient deaths and reveal a hospital administration determined to shield its reputation at all costs. While the hospital wages an explosive court battle that grips the entire nation, the Women's Murder Club hunts for a merciless killer among its esteemed medical staff.

The 6th Target
While Assistant District Attorney Yuki Castellano prepares to prosecute the toughest trial of her life, the city is in the grip of a chilling crime spree. Children of well-to-do families are being abducted. But the kidnappings are followed by devastating silence -no demand for ransom. Working frantically with her new partner, Lindsay Boxer struggles to find the connection that will help them make sense of these horrific crimes.

This title is due for release on March 1, 2009
We'll send you an email as soon as it is available!