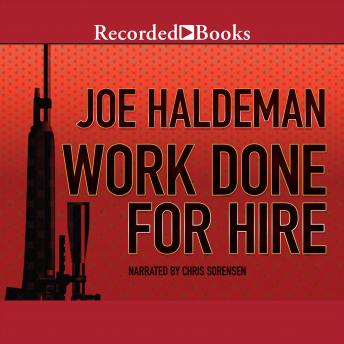 Joe Haldeman' s ' adept plotting, strong pacing, and sense of grim stoicism have won him wide acclaim' ( The Washington Post ) and numerous honors for such works as The Forever War , The Accidental Time Machine , and the Marsbound trilogy. Now, the multiple Hugo and Nebula award- winning author pits a lone war veteran against a mysterious enemy who is watching his every move-- and threatens him with more than death unless he kills for them. Wounded in combat and honorably discharged nine years ago, Jack Daley still suffers nightmares from when he served his country as a sniper, racking up sixteen confirmed kills. Now a struggling author, Jack accepts an offer to write a near-future novel about a serial killer, based on a Hollywood script outline. It' s an opportunity to build his writing career, and a future with his girlfriend, Kit Majors. But Jack' s other talent is also in demand. A package arrives on his doorstep containing a sniper rifle, complete with silencer and ammunition-- and the first installment of a $100,000 payment to kill a ' bad man.' The twisted offer is genuine. The people behind it are dangerous. They prove that they have Jack under surveillance. He can' t run. He can' t hide. And if he doesn' t take the job, Kit will be in the crosshairs instead